The mysterious "Goura"
from South-Africa
- a Mouthblown Musical Bow -

The "Goura", "Lesiba", "Ugwala", "t'Gorrah" or "Gom-Gom" is the only stringed musical instrument in the world, which is not plucked or hit nor bowed but blown with the mouth to make it sounding.

Please hear a sound-example in order to get an impression of the somewhat crude tones between a harmonica and a saxophone played by a novice - I'm still learning... ;-)))
Another sound example on a CD.

To this extend the "Goura" appears as THE transition from wind-driven (=aeolian) instruments played by the natural wind with its "random-music" like the Aeolian Harp to a real musical instrument in the full sense of the word, completely controlled and played by man.

The first tidings on this unique musical instrument was published for the first time in Europe by the German Peter Kolb (1675-1726) in 1719.

In his "Caput Bonae Spei Hodierum", a very detailed description of his ethnologic studies and experiences from his stay in 1705-1713 at the Cape of Good Hope, he tells us on  the "Goura": 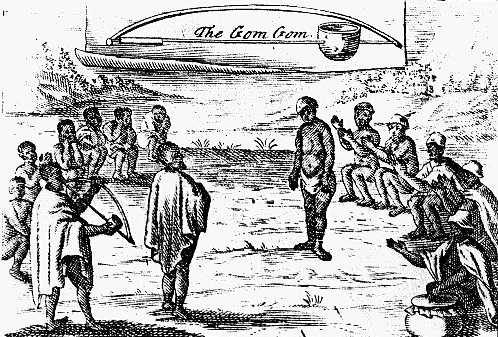 Illustration in P.Kolb's diary modified by Balfour
...the man, left at the bottom is holding the "Goura" in playing position...

(...) This Gom-Gom is a round bow made of dense, tough wood, like olive-tree or iron-wood. It is strung with an average-sized string like the "A"-string on an violin made by themselves (the natives) from sheep-gut or sinews. At the string's end, which is bound to the bow, they fasten a cut, slit and flattened feather-quill, which they hold in their mouth together with the string, in order that the vibrating of the string won't hurt them and the good sound of the string, which they generate by inspiring and blowing the breath, won't be taken away (...)

Kolb further describes the use of an empty coconut-shell, one third of it being cut off, the remaining two thirds of the shell-bowl is perforated with two holes near the cutting edge in opposite position and thread onto the instrument's string through the two holes.
The coconut-shell, serving as a resonator for amplifying the sound, also acts to modify the pitch of the instrument by varying the string's tension  (by bending/ inclining the shell on the string) while playing.
The other end of the string is fastened by means of an adjustable, gliding leather bandage tightly wound around the bow, acting as a controlling device for the string's basic pitch/ tension (around 100-200cps).
Kolb is telling us his own impression of exceedingly pleasant sounds generated by an orchestra of 3 to four Goura-players (where each participant has a range of about 4-6 different tones contributing to the ensemble)
His description ends hoping, that one fine day "fingers more skilled than Hottentot's" might come over the instrument in order to bring to full completeness the capabilities of the instrument...

(...) It consists merely of a slender stick or bow, on which a string of catgut is strained. But to the lower end of this string, a flat piece of about 1 1/2 inches long, of the quill of an ostrich, is attached, so as to constitute a part of the length of the string. This quill being applied to the lips, is made to vibrate by strong inspirations and expirations of the breath ; each of which ending with an increased degree of strength had always the same effect of forcing out the upper octave; exactly in the same way as produced in the flute, an instrument, therefore, which may be made to imitate the goráh sufficiently near to give some idea of it. The old musician seating himself down on a flat piece of rock, and resting his elbows on his knees, putting one forefinger into his ear, and the other into his wide nostril, either as it so happened, or for the purpose, it might be, of keeping the head steady, commenced his solo, and continued it with great earnestness, over and over again. The exertion which it required to bring out the tones loudly was very evident; and, in his anxious haste to draw breath at every note, our Orpheus gave us, into the bargain, intermingled with his music, certain grunting sounds which would have highly pleased the pigs; and if any had been in the country, would indubitably have drawn them all round him, if only out of curiosity to know what was the matter. (...)

I can't conceal that in some of the later accounts the "music" of "this terrible instrument" is likened to the "braying of an ass", or the "sound drawn from a clarinet by a novice"...

Lichtenstein's account of 1902 is significant in its indication of the fact that even so early as the beginning of the last century, this instrument was beginning to die out among the Hottentots, and that it were only the older men who performed with any real skill.

Today, the instrument is the "national musical instrument" of the South-African state Lesotho, but unfortunately it was impossible for me to get any further informations or even sound-examples of recent times.
So, equipped with the above informations, never before having heard the original, "right" tones of the instrument nor seen someone playing, I began to experiment, having in mind and in my ear aeolian instruments working in a similar manner:

The first trials were very promising concerning the aspect to generate tones by blowing onto a flat string at all..., although I used other materials for this special musical bow: 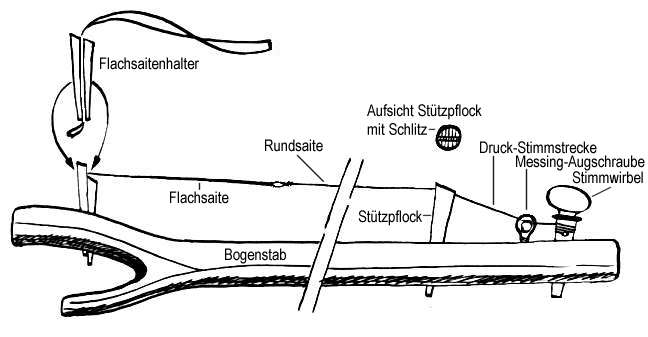 Playing the bow consists of bringing the lips near the flat part of the string or better bringing the flat part between the almost closed lips, leaving open a fraction of 1-2mm for blowing.
Tones are generated by blowing and inspiring alternately against the flat string making the string vibrating. The mouth acting as a resonation chamber can modify the sound like in a Jews Harp.

The pitch of the tone can be changed by different methods of interacting with the flat part of the string:

Please hear a sound example by an skilled "Goura"-player, following the Lesotho playing style, the player forms additional tones with his voice...

Might interested people work with this extraordinary instrument in order to bring its many possibilities to full blossom...

Do you know people, who manufacture such instruments?
Do you have original recordings...?
Please let me know, THANKS!

You could give me the opportunity, to improve these pages for you,
so please Mail me up your opinion , thank YOU!

Developed and completed by
Uli Wahl, All Rights Reserved


Do you want to know more about aeolian instruments?